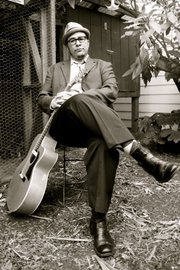 World Premiere of I've Been To Manhattan Video and MP3!

A transgender man dons and sheds a closetful of sweaters at maximum speed in the tragicomicThreadbare. Set against an impressionistic backdrop, Oscillare follows Alyson Bowles along the remnants of the golden dream—abandoned fields, fast-food parking lots, and the sun-bleached borderlands between reality and desire. A teenage prostitute must take creative measures to escape a brothel when her secret is discovered in Nisa. With haunting suburban visuals backed by the rich sounds of Toronto based-band Ohbijou, Akin powerfully examines the silent secrets of a shared past. Twenty-one-year-old hairdresser Phyo Lay provides a rare glimpse into the emergent gay community in Burmese Butterfly. Folk-twang singer/songwriter StormMiguel Florez drinks deep to forget in his first music video, featuring SF queer and trans celebrities and zombies. 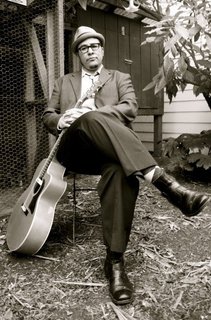 I sat down with two of the Bay Area’s most talented and prolific trans folk music heroes, Eli Conley and StormMiguel Florez.  See Eli live at El Rio (San Francisco) on April 26, and StormMiguel on April 29 at Second Story Arts Collective (Sacramento)!

So, how would you guys describe your music to our readers in 3 words?

Beautiful!  And what inspires you to be artists?

EC:  I’m inspired by my friend, feminist singer-songwriter Talia Cooper, who says that artists aren’t “special”, we all have the capacity to be deeply creative. Artists are just folks who choose to prioritize and follow creativity. When I think of it that way, I pay attention in my day to day life, recognizing that songwriting inspiration can strike anytime. The trick is to allow myself to drop into what I’m doing and follow that path to see where it takes me, something I’ve done a lot more of since allowing myself to claim the title “artist.”
More

_Out and Around Interview
Super”trans”: Musician StormMiguel Florez By Jenni on June 3, 2011

There are plenty of male folk-twang American singer songwriters. But not many of them can say they learned to write songs at Girl Scout camp.” In his music bio, StormMiguel Florez talks about being born and raised as a girl in Albuquerque, New Mexico, and later making the decision to live his life as the gender he always felt he was.

Amongst our friends, Storm ranks at the top of the list as one of the most fascinating people we know. When we sat down with him after brunch in our home, we found out that Storm is also one of the most well-spoken people we know. So instead of writing up this interview as an article, we thought we’d just let Storm speak for himself.

It’s usually a bit of a challenge to come up with something interesting for my first column of the new year.  This year is different, though, for two reasons.  First off, I planned ahead months in advance.  And secondly, I found StormMiguel Florez.

Florez is, in his own words, “…a Mexican American FtM, genderqueer, singer/songwriter, performance artist, and live sex show instigator.”
I first learned about him a year or so ago, and partly through Shawna Virago who was featured in our companion Transvocalizers column, we were able to make arrangements for the following interview.
I have always personally felt that transmen are the most under-served segment of our community.  Well, TGForum will always work to change that.  And talented people like Florez will make the kind of dent in the collective consciousness that can’t be ignored.  He has a great interview with NPR that’s still posted, and is a published author as well as a musician with extensive past experience.  Florez has also recently released his first solo album project since transitioning, Long Lost Sun, which we plan to review next month.

TGForum is pleased to introduce Storm Miguel Florez to our readers as the first installment of Perpetual Change for 2011.