Upcoming Shows and Events in 2014

​After a spell of not performing or posting about my music, folks have been asking where I’m at with music these days. This has prompted me to seriously ask myself the same question.

As some of you may know, over the past several years I have been really excited about filmmaking and editing and have been fortunate to be involved with amazing documentary film projects like MAJOR!, Looking for Leia, and my own latest film, The Whistle. While working on these and other projects, I have noticed that my creative focus has shifted and I have been less drawn to perform music. After almost 30 years of performing, I’m more surprised by this than anyone. However, whenever I’ve been invited to perform and tour over the past couple of years, I found myself telling people "Yes! Let’s do it! But not right now. Check back in with me in three months after I finish this project or this phase of my documentary.” Three months pass and I’m pushing it another three months and so on and I start to feel like a flakey date. Sorry!

So instead of trying to fit performing into my life or putting it off, I’ve decided to be more intentional about it and just say, I’m taking time off. How much time? Who knows, but definitely more than three months and probably more than 6 months. In the meantime, I hope you follow my film projects and listen to my recorded music that will always be available. I will continue to post what I’m up to as I always have with occasional emails via my mailing list, and from my Facebook page.

Also, if you are in the SF Bay Area, a work in progress reel for my upcoming documentary, The Whistle will be debuting on Saturday, November 11 at the SF Transgender Film Festival- PLUS - I’ll be in two other films that night. I have a cameo in Shawna Virago’s new music video “Last Night’s Sugar.” AND I play the lead character in a short called "Socorro” by Maria Breaux! In Socorro I play a lonesome musician in a “faraway time in a desolate place.” I perform a song in the short, sooooo if you want to catch me performing - on screen, come to the SF Trans Film Festival on November 11th!

Socorro is in the 7PM program
The Whistle (work in progress) & Last Night’s Sugar are a part of the 9 PM program, ***which will be closed captioned/subtitled for deaf & hard of hearing folks***

I have so much love and appreciation for all of you who have supported me and my music over the years! It is still a part of me and so are you because I know I couldn’t have done it without your love and support and cheerleading and invitations to perform.

I hope you are safe and housed and breathing well during these turbulent times. If you are not, I hope you are getting the support you need to get through it. I’m holding you all in my heart and in my thoughts and in my actions.

StormMiguel with The Shondes at El Rio 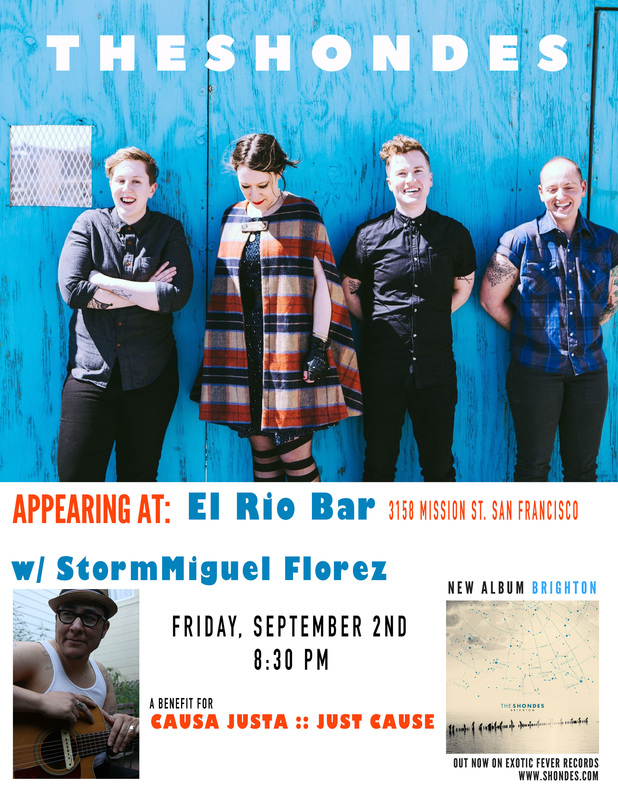 Seating is first come, first served. We recommend you buy in advance to ensure being a part of the event, but you can also try purchasing at the door on the night of the show.

*This venue is NOT wheelchair accessible. There are 4-5 steps to enter the building and the restroom is now on the same floor as the theater, but it’s two steps down to reach it. 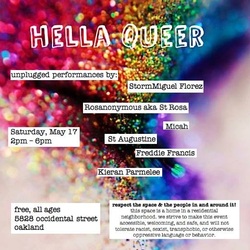 ++ StormMiguel Florez ++
New Americana Transgender Cantador who sings about love, oppression, assimilation, and growing up an outcast in the US.
http://www.stormflorez.com/

++ Micah ++
Up-and-coming hip hop artist who reps the #kunq with force, using aggressive politics and witty wordplay to get his message across.
http://micahraps.bandcamp.com/

RESPECT THE SPACE
& THE PEOPLE IN AND AROUND IT!

this space is a home in a residential neighborhood. we strive to make this event accessible, welcoming, and safe, and will not tolerate racist, sexist, transphobic, or otherwise oppressive language or behavior.

*The Unfortunate Bastard, busker-gypsy-latin punk from Dave Dalton & Juan Barajas memebers of The Screaming Bloody Marys.
*Kimberley Kenney: bluesy belter
*more artists to be announced
Cash's story began with more than two years of merciless bullying at his school [without intervention] culminating,this spring, in an incident so severe that suicide seemed his only escape. Luckily, thanks to his vigilant mom, Cash is still with us, healing but suffering from PTSD & unable to return safely to his school. We raising funds to help with his medical, educational and & legal needs.
Cash & his mom, Missy, will be joining us at this show
$15 advance tickets online www.thelostchurch.com
Tin And Tambourine Weekend produced by Dana Hopkins & Dave Dalton 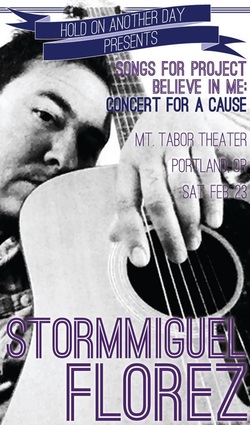 HOLD ON ANOTHER DAY presents
Songs for Project Believe in Me:
Concert for a Cause
w/ Tyler Matl, StormMiguel Florez, Eli Conley, The Cabin Project


This is an all ages event!

Project Believe in Me is a completely youth-led initiative dedicated to ending bully-related suicide. Our two missions are daunting, but simple: To end bullying, and to give youth the resources to make change in their communities. Project Believe in Me is deeply rooted in the firm belief that it’s our duty as members of this earth to share our stories.

Words have power. Unfortunately, we’ve learned this because of the power that hurtful words have. However, you have the ability to reclaim this power. Our letters are one way of displaying the amazing and beautiful power of words.

Maybe you need our services. Maybe you need to share them with a friend. Maybe you feel a need to join us on this journey. Whatever it is, take hold of the power to RISE UP and make a change.

Songs for Project Believe in Me is a one-for-one anti-bullying compilation album produced by Hold On Another Day. The 13-track CD is filled with uplifting, inspirational music written and performed by rising musicians from cities across the world. For every copy of this album sold, one will be donated to a youth struggling with bullying.

Friday April 6th, 2012 - San Francisco
THIS IS NOT A PERFORMANCE

BAD FLOWER PRODUCTIONS AND THE SISTERS OF PERPETUAL INDULGENCE PROUDLY PRESENT
Sing Along Jesus Christ Superstar  - A ONE NIGHT ONLY EVENT!!!